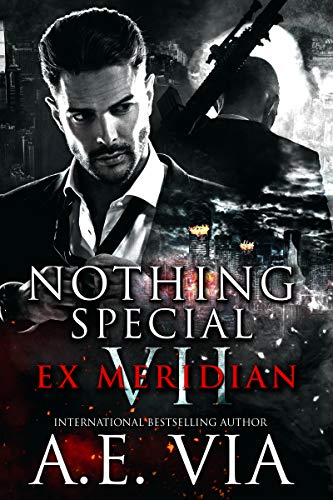 Police Lieutenants, God and Day are under intense pressure from the chief to take back control of Atlanta’s streets. The last thing their task force needs is a pair of trained killers in town with a personal score to settle.

Take a man and strip him of his ability to feel compassion, empathy, remorse, or any of the emotions that make him human, but leave the ones that ignite rage and aggression and you have the perfect killing machine—now imagine two of them.

Code names Ex and Meridian are synonymous for ‘guaranteed death’ to international terrorists. Two broken men from the same crooked streets, recruited into an unsanctioned government program that few know about. Trained to operate most efficiently—lethally—together.

When Ex returns from an op in Bolivia to learn his little brother has been accidentally killed in a feud between drug gangs, he’s stateside before he can consider the rules he’ll be breaking, and of course Meridian is right beside him. There’s mayhem on the streets of Atlanta and the police are losing control. If Godfrey and his elite team of detectives can’t get the job done then they’d be happy to lighten their caseloads for them. And Ex nor Meridian care about doing it quietly.

“I know who you are.” The man grunted when Ex turned to leave. “You’re the fucking devil.”

Meridian walked past, glaring one final time. “Say that loud enough… maybe God will save you.”

But after their first run-in with the big lieutenant and his protective husband, Day, Ex and Meridian start to reevaluate their own relationship. Wondering if they could be even deadlier if they let loose the feelings for each other that they’ve been forced to suppress for years.

Meridian’s dark eyes stayed locked on his, “A man who can fight beside the one he loves doesn’t make him weaker, Ex—it makes him more dangerous.”

No multiple pairings. No cliffhangers. Ends with a HEA.

Once inside, Ex went to the kitchen and got three bottles of water out of the refrigerator. He tossed one to Meridian first, then to Slade. He drank the contents of his in three swallows while he watched his partner remove his coat and hang it over the recliner in the living room.

“Sorry it took me a little while to get this information, but you guys won’t let me hire any help.” Slade murmured.

Ex didn’t respond, his face impassive once again while he watched Slade remove folder after folder from his messenger bag. He was very aware of Meridian moving in close behind him and looking at the files over his shoulder. He could smell his partner’s subtle woodsy cologne and feel his warm breath on the back of his neck. It wasn’t the first time he’d become ultra-aware of Meridian’s presence until he sought it out, but it’d been a long time since he’d felt that way. He’d been good at tamping down any intimate feelings and stifling his natural urges in the past. Maybe it was the gravity of what they were doing together that had old feelings brewing.

“What do you got?” Meridian asked Slade, speaking too close to Ex’s ear. He barely suppressed the impulse to tremble and instead locked his knees and steeled his spine to conceal any reaction to Meridian’s closeness.

“The taskforce is made up of nine men and some admin support staff. The main players are these eight detectives right here.” Slade arranged the manila folders in sets of two. “Here’s the interesting part. These two have the same address, these two live together, and them right there, Detective Steele and Detective Murphy.”

“Roommates who do a lot more than just share the living expenses.” Slade waggled his thick eyebrows like a creep.

Ex turned away irritably and stared at the photos of the tough-looking task force, then began to read the information Slade had collected on each of them. These were certainly not the average beat cops. He had to admit that Lt. Godfrey had put together one badass squad to tackle Atlanta’s drug war crisis. All of the men had stellar law enforcement backgrounds and multiple commendations but there were a couple of them who had decorated military careers. And one in particular stood out to Ex—the marine who’d been stationed in Yemen in oh-one

and oh-two during the height of the Al Qaeda insurgence. It meant he was Special Forces, which meant Detective Edwin Steele could be a problem for them.

Meridian took Godfrey’s folder from the top of the pile. “He’s gay?”

“All day.” Slade pointed to some surveillance footage of Lieutenant Leonidis Day from a bust they’d done last year. “And married to this one.”

“He’s married to his partner?” Ex hid the surprise he felt. “I didn’t think that was permitted. Couples can’t even work in the same precinct, not to mention be partners.”

“Well they are. It appears that Godfrey’s task force has received a lot of special treatment from the Chief and the Mayor… as long as they continue to produce results. And not just them. Day and Godfrey’s street enforcers are partners, living together.” Slade stressed the last couple of words. “Also his back-up technology specialist—Shawn Murphy—has prior convictions of computer crimes and is partnered up with this one—Steele. Let me tell you, following him wasn’t easy, I think he gave me the slip, actually.”

Fuck. Ex glanced over his shoulder at Meridian. A Special Forces marine would be hard to fool.

“I’ve been following them when I’m not with you guys. They go to work; they go home, and work.” Slade shrugged.

“Anything out of the norm at their homes?” Meridian asked, his deep voice and strong presence still just behind him.

Ex felt Meridian ease in even closer as they watched the fifteen-inch monitor. Closeness was never weird for them, there’d been countless instances where they’d been in confined quarters with danger even closer, pressed tightly to each other. They’d been trained to function best that way—close. And each time Ex had kept himself in check. Now, he struggled.

Nothing Special VII: Ex Meridian is the latest installment in the series of these badass narcotics detectives.
Aiden Snow continues to bring my alphas to life with the sexiest, rawest voice you've ever heard!