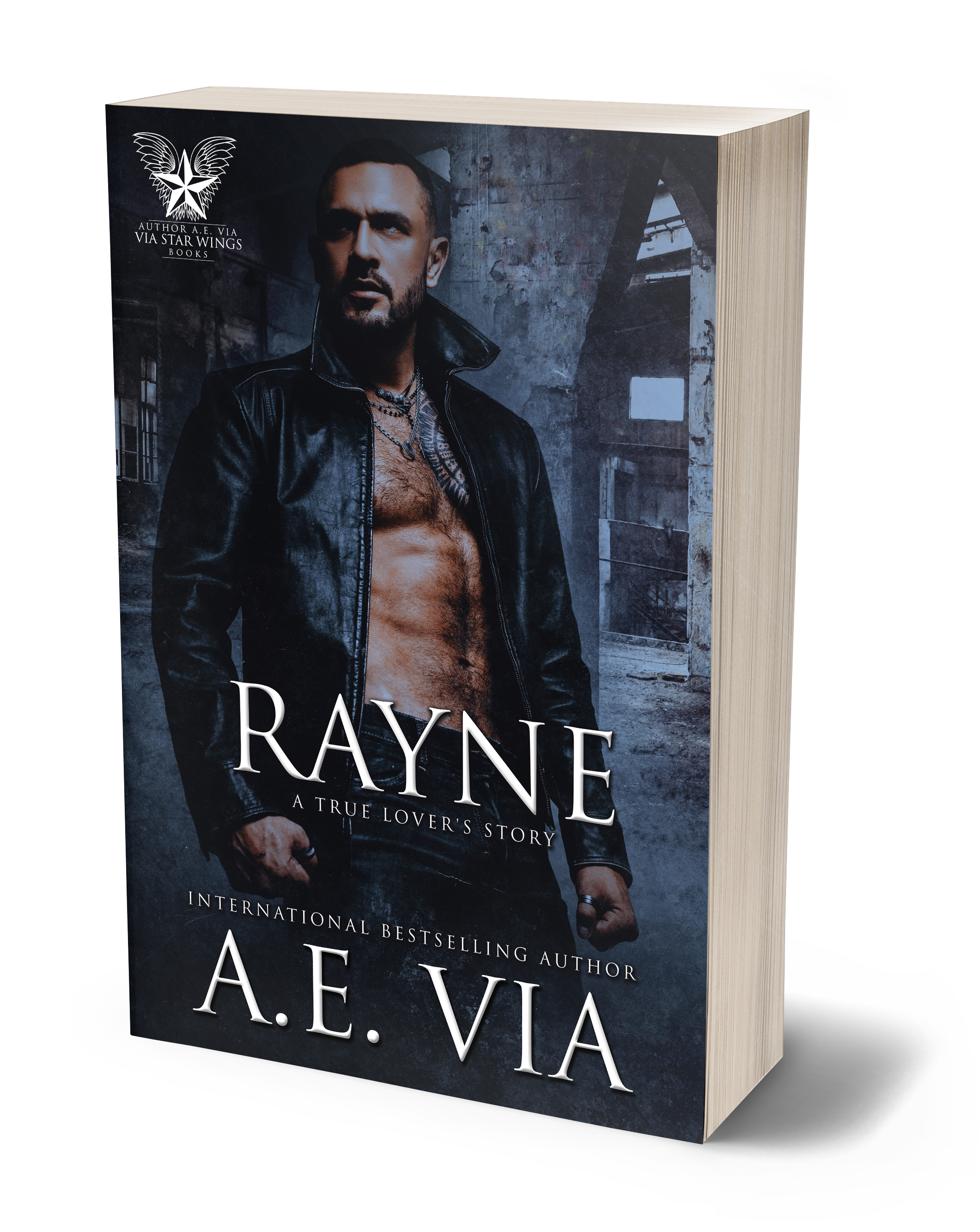 He was the light to his darkness, the calm that broke through the storm.

Mike Stockley has taken care of himself since he was thirteen years old. Growing up on his own made him smart; joining the Devil Wreckers gang made him dangerous. He learned how to read a man’s intent with one look in his eyes, and he knew how to change it with one swipe of his blade. Mike’s street knowledge and f**k-all attitude made him notorious. His frightening reputation made him Big Mike.

Now at forty-eight, Mike has a successful landscaping business and is away from the gang lifestyle, but he kept the skills he learned and the mindset—meaning Mike is just as feared in the streets as he always was, making him a force to be reckoned with. But what it didn’t make him was relationship material. Mike is hot-tempered and quick to jump, but he’s capable of being talked down when he has the right person in his ear.

Rayne Montgomery grew up on the right side of the tracks. He was used to having money and the finer things in life. But after being shunned by his high-class family for being gay, Rayne had to learn how to survive on his own. He has the looks, charm, the suave voice, and the body to get whatever he desires, and Rayne knows exactly what kind of man to con in order to get it.

All destructive conditions come with challenges, and Rayne’s are no different. He knows he has to change his life but he’s terrified and lonely. With the help and support of his friend Wood, he knows he can beat this disease. He can stop making the same mistakes and live happily ever after as a recovered sex addict.

Rayne just has to find a man strong enough to truly love him.

The True Lover's Series are connected standalones. Each title features a different couple but will contain previously mentioned characters.

Note: This is the final book in the True Lover’s trilogy. There are no multiple pairings or cheating. No cliffhangers. Ends with a lovely HEA.
This is a steaming angsty, age gap, new-to-love romance.

Mike checked his watch for the fifth time in twenty minutes. His cell phone was dead by the time he got his property back. He was released on bond with a summons to appear in circuit court in three and half months. Wonderful. Most of the judges knew him and had threatened him more than once that they better never see him in their courtroom again. They didn’t like him because he was too slippery and prosecutors could never secure a single witness that wasn’t too afraid to testify against him in the past. But in this case he was innocent.

“Damnit! Where the hell is that boy? I swear—.” Before Mike could finish cursing, he saw Trent’s dusty pickup turn into the parking lot. “About fuckin time.” He was reaching for the door handle when he noticed that it wasn’t Trent behind the wheel, it was his boyfriend, Wood. “What are you doing here?”

“Trent got called into work early so he asked me to come.” Wood said with an annoying grin curving one side of his mouth. “You look great, Mike.”

Mike got in and slammed the door hard enough to rattle the dashboard. “I’m glad you like the look of utter fuckin disdain, Wood. Now drive.”

“You’re welcome,” Wood muttered then put the truck in gear, jerking away from the curb.

“What took you so long?” Mike dropped his head back against the headrest, his right temple throbbing. He was so damn angry he was trying to breath and not rage, but it was far harder than it sounded.

“I was busy,” Wood scowled.

“Manny called you guys at six this morning, what the hell were you doing?”

“Enjoying my freedom. You were the one in timeout not me,” Wood chuckled and Mike just barely refrained from flinging open Wood’s door and kicking him out onto the highway.

Mike tossed his bag labeled Chesapeake City Jail Inmate Property onto the floorboard when he felt a presence behind him. He whipped his head around his breath hitching in his throat when he saw it was Rayne in the backseat looking like a goddamn hot breakfast sandwich.

Which only served to infuriate Mike even more. It was his first time seeing the younger man since he’d ran into Wood’s tattoo shop a couple of weeks ago seeking protection and a safe place to live. Mike still didn’t know why he’d intervened and reacted the way he did that evening or why looking at Rayne now affected him the way it did. He just knew there was something unique about the younger man that tugged at a part of himself he’d long forgot existed. Mike hadn’t had a reason to go over to Trent and Wood’s place since Rayne moved into the trailer and he’d been meaning to make one up. He certainly hadn’t wanted their next encounter to be like this.

“Good morning.” Rayne spoke as if he was whispering and speaking aloud at the same time. Silken, relaxed, yet confident, and it blew Mike’s mind.

He tried not to do a full inspection but his gaze roamed over Rayne’s immaculate physique anyway. He wore black jeans that hugged his thighs and slate-gray designer boots. Mike could only tell that because he was able to see the name brand on the bright red bottom since Rayne was sitting with one ankle propped on his other knee. He was leaning partly against the door, the other half of his back against the seat as if he was purposefully facing Mike to allow him full view to continue his inspection. The sensual glint in Rayne’s gray eyes while he watched Mike in return made him feel as transparent as glass.

“You okay over there?” Wood broke the weird silence that was left suspended in the cab after Rayne’s polite ‘good morning’ went unanswered.

Shit. Why am I breathing so hard? Oh yeah, because he was furious. Not because he was feeling some kind of way. “I’m fine,” he rumbled at Wood. “I’m just tired and need to get home. It’s been a long night.”

Mike muttered a quick “morning” in Rayne’s direction that tasted sour in his mouth.

“Hope you don’t mind Rayne tagging along. He needed a ride to a meeting that’s close to the shop. Thought I’d multi-task,” Wood shrugged his big shoulder.

“Is that what you thought?” Mike gritted. No, it is not okay that he brought Rayne. He didn’t want anyone, but especially him, to see him like this. Getting sprung from The Breaks holding tank like some common thug.

Mike looked and certainly smelled like hell. He didn’t even want to think about how his breath was probably giving the usual scent of Trent’s work truck—that always smelled of sheet rock and work boot insoles—a serious challenge. If Rayne smelled half as good as he looked, Mike couldn’t tell because his own funk was overpowering it.

“Tough night, I presume. Are you okay?” Rayne asked gently. It wasn’t condescending or offensive. It sounded like genuine concern.

“I’m good.” Instead of explaining what happened to land him jail and rattling off a bunch of lame excuses Mike kept his stinking mouth shut.

“Rayne, I’ll drop you off first. I know it’s going a little backwards from Mike’s house, but I don’t want you to miss the meeting. It starts in twenty minutes,” Wood said, already taking the exit ramp off the interstate. “If I drop Mike off first, you’ll miss the first half hour.”

Wood pulled up to the curb and put the gear in park. It took too long for Rayne’s gaze to ease off the side of Mike’s face but he finally did. He heard the back door open and close, not turning around to watch Rayne walk away. Fuck, he was so damn exhausted, wired, confused, and then more wired. He couldn’t think straight. What the hell is it about that guy?

“I know that look, Mike. But, I’m telling you right now… he’s off limits.” Wood broke the tense silence when they were almost to his house. “You think you’re the first straight man that’s wanted a piece of Rayne?”

It took the remainder of the ten-minute trip to Mike’s house before he’d calmed himself enough to say the words he wanted to say without following it with a quick swipe of his blade across Wood’s cheek for his disrespect.

“First of all, you don’t know what the hell I want. But if you did, Wood, you better stay the fuck ’outta my way while I go get it,” Mike said and got out of the truck.