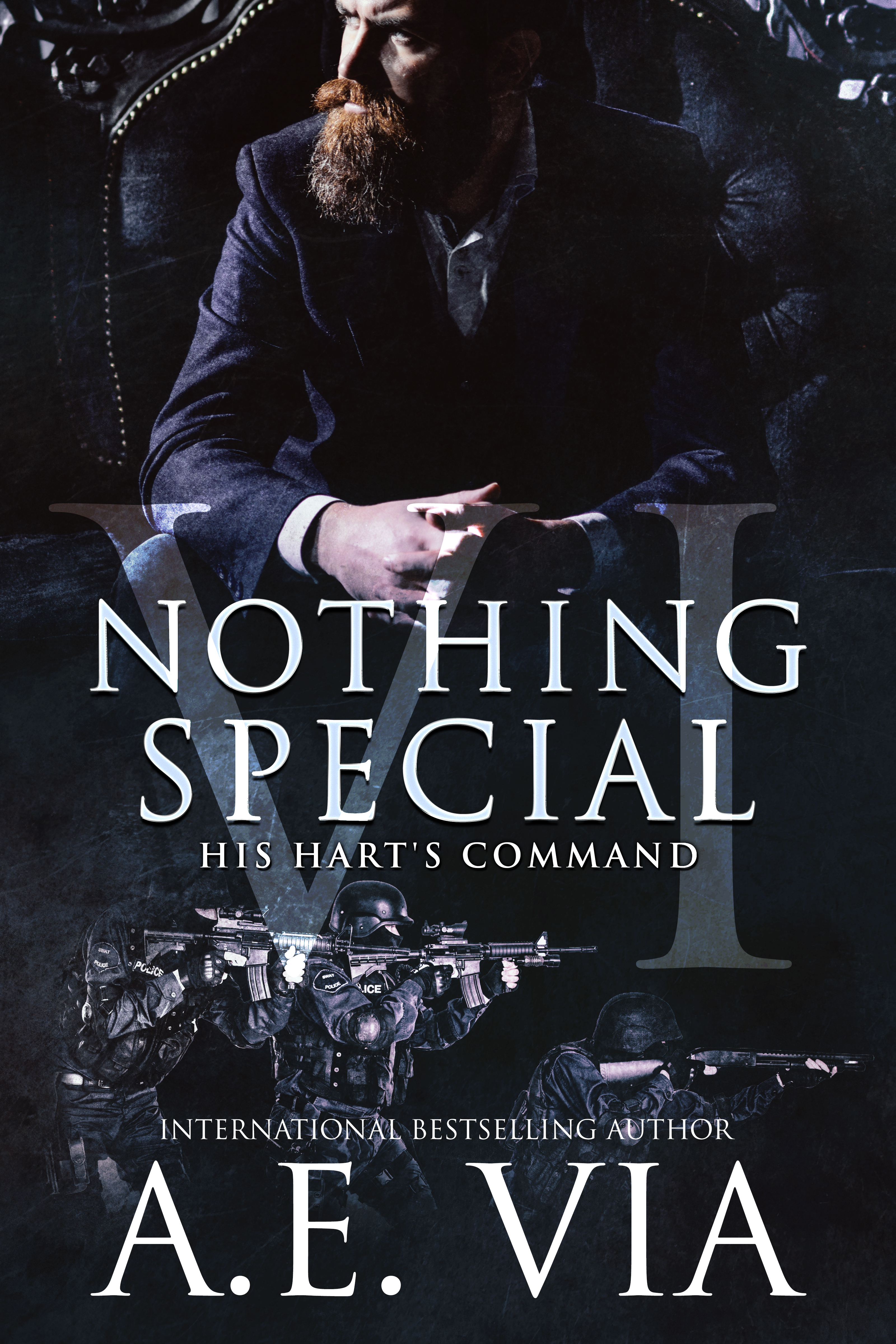 Nothing Special VI: His Hart's Command

Lennox Freeman (Free) is one of the best hackers in the world causing him to spend most of his life on the run. Never able to put down roots, he can’t trust anyone not to take advantage of him, even his own family. If it wasn’t for his best friend, Tech, shielding him, Free’s father would’ve sold him and his skills to the highest bidding crime family while he was still a student at MIT. Free owed Tech his life; so when his friend calls for Free to come to Atlanta to work with him, he can’t say no. However, he isn’t expecting the overprotective group of detectives who make up Atlanta PD’s most notorious task force. And he certainly isn’t prepared for the large-and-in-charge SWAT Captain who’s responsible for their safety.

Ivan Hart has lived and bled one creed all his life: To Serve and Protect. His intense focus and determination has led him to commanding his own team. He’s worked hard to put together a squad of badasses capable of backing up a very dangerous team of detectives. Being God and Day’s last line of defense comes with a lot of responsibility that he takes very seriously.

After his divorce was final Hart turned right around and remarried his job. He has his good friends in the office with him every day, so it’s easier to ignore the few quiet hours he spends at home alone each night. He’s settled well into his new routine and is comfortable with it. Then God decides to disrupt everything by hiring another tech specialist for his department. A man whose brains, trendy looks, and voice leave Hart tongue-tied and captivated at their first introduction.

Free quickly awakens a passion in Hart that he’d long thought dead. An attraction he didn’t know existed. He can’t fathom that the sexy cyber genius could be interested in an oversized, big-bearded brute who serves criminals the bottom line for a living. No matter what his best friend, God says.

A future with Hart could be dangerous and often times full of close calls; but little does he know that so can falling for the most hunted hacker in the world. All Lennox Freeman wants in life is security, love and protection… Hart has all that to give and more.

This novel is a part of a series and contains previously mentioned characters, but CAN BE read as a standalone. No cliffhangers.

Hart was laughing and enjoying his friend so much he hadn’t realized he’d forgotten to be nervous and watch the door. There was no one else that he could talk with like this. No one on his team knew that he was interested in dating a man, now that he didn’t have an overseer running his life. Fox was constantly hinting for him to get back into the dating scene, but no one knew of his suppressed desires. He’d married way too young, trying to do the right thing.

“I can’t believe you guys ate all the damn food!” Tech yelled.

Hart jerked his head up. Tech shoved and pushed his way around the table, trying to find at least one abandoned wing or forgotten piece of sub. He looked hilarious in his sweater vest and red plaid bow tie as he wreaked havoc on fifteen men twice his size. Tech wasn’t one of God’s enforcers for nothing. He may have dressed like a geek but he was the most dangerous, lethal geek to hit the streets of Atlanta. Tech sat down between Ruxs and Green and demanded they order him some food.

Some of the team had the decency to appear guilty, but most of them started bitching about Tech being so late. Where is he? Hart spun around, checking behind him and up at the bar. He really didn’t come? Hart smoothed his hand over his clean-shaven scalp. His face heated, and his head warmed to an uncomfortable temperature. He couldn’t have felt any dumber if he’d tried. He’d asked out a man almost ten years his junior and was actually surprised he’d been blown off.

Hart stood and put on his best fake smile, although he knew God would see right through it. “I’m gonna head back to the station. Get a start on next week’s assignment.”

“Certainly not before you buy Free that drink you promised.” God didn’t bother glancing up from his next shot. “Be cool. He just came out the bathroom. Go take him to the bar before he sits down.”

Hart’s feet were glued to where he stood. Free walked through the bar, heading towards their tables. People were watching him, just like he was. Hart wanted to hurry over to him but he couldn’t stop staring. He looked amazing in those tight blue jeans. While Hart had been gone the last couple of weeks, Free had cut most of his hair off. It was shaved close on the sides, with trendy spikes sticking up in various directions on top. Hart’s pulse beat at an unnatural rhythm the farther Free moved the opposite way. He stopped suddenly, scanning the table. He hadn’t sat down.

“I think he’s looking for someone,” God said from beside him.

“Who?” he blurted stupidly, still gawking at Free’s compact ass.

“Ouch, shit.” Hart rubbed the back his head where God had just slapped the dumb out of him.

“You idiot. He’s looking for you,” God growled. “Hurry up, call him over.”

Free was glancing around the bar. Clearly searching for something, but Hart didn’t want to hope that much. “He might be trying to find the bathroom.”

God yanked Hart’s arm. “Snap out of it, Jesus. He just came out the bathroom. Call him.”

Free was pulling out a chair that Tech had slid over for him.

Hart wanted to thank his friend and elbow him in his ribs at the same time. Except when Free spun in their direction and a wide grin spread across his gorgeous face, Hart forgot all about the elbowing part. “Okay, he’s coming over.”

Hart’s palms felt uncomfortably damp. “Shit. He’s bringing Tech too. Oh hell. All right. What… what should I tell him? Hurry up. What do I do?”

God didn’t laugh at him or make him feel like an idiot, instead he put a heavy hand on his back and leaned towards him. “Take him to the bar for a drink. Talk. Ask a lot of questions about him. A man likes it when you listen to what he has to say and not take over the conversation, bragging about your own shit.”

“Hey. What are you two doing over here by yourselves?” Tech asked, snatching God’s pool cue and scanning the arrangement of colored balls still on the table. “Up to no good?”

“Just talking,” God answered, cutting his eyes to Hart, trying to give him some kind of signal.

Hart blinked the fog from his brain. “Hey. I see ya’ll made it… I mean found the place… Not found… You know where it is. I mean you guys made it.” Hart closed his eyes and took a deep breath. When he opened them everyone was riveted on his ridiculous stutter.

“Yeah. Sorry we’re so late. We were in the parking lot talking. So, how’s it going?” Free walked around the pool table and came to stand beside him. “Looks like we talked too long out there. All the beer and food is gone.”

Hart could just barely see God over Free’s six-foot one frame making an obvious drinking gesture with his hand and pointing towards the bar. Free looked over his shoulder and God hurried to put his hand down and grab his beer, innocently staring off into space until Free turned back around.

“Well, I did say the first round is on me. I rode my bike but I’m allowed one beer.”

Free’s eyes widened, the dark irises shining with excitement. “Yeah, I saw it out there. Must be nice to jump on that and ride after being gone for so long. It looks hot as shit. Nothing but black and chrome. I love it. Always wanted a Hog, but moving around so much…”

Hart smiled. He could listen to that slight British accent all evening. And he could definitely talk bikes without any problem. Free moved towards the bar and Hart followed him like a hopeless Pepe Le Pew.