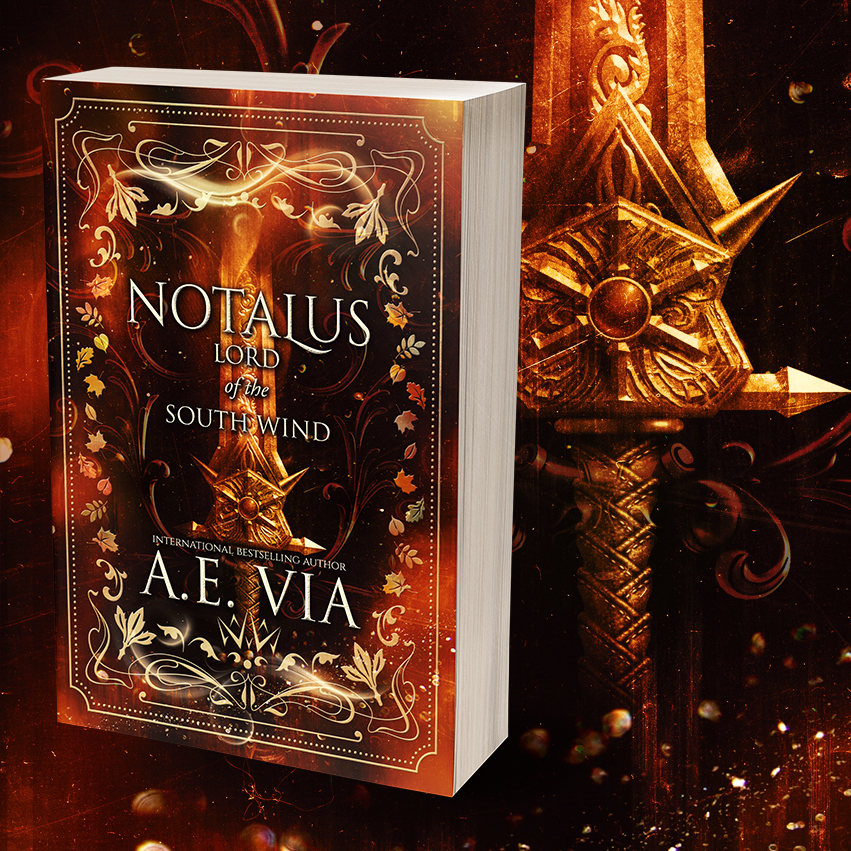 Notalus: The Lord of the South Wind
The "Oneclick" buy link will be live on this release date release date: December 10, 2022

Patrons of the Autumn Realm, All Hail, Notalus Cavalerie! The last of the Horsemen and Harbingers of Justice. The Overseer of the Harvest and Creator of New Life. He is the Titan of Tir an Fhomhair and Lord of the South Wind.

After two thousand years of providing peace for his people, Notalus was ready to pass on his kingdom to his heir and live out the rest of his days gardening in his fields in the land of Autumn… alone.

But the Gods had other plans for him.

Notalus knew he should’ve stayed away from the Earth realm after Dustin Constus Hill—the handsome wolf and harvester for the Volkov pack-lands—had imprinted on his soul. Falling for such a divine mortal could not have come at a worse time.

“Love comes fast for titans when their souls are touched.”

NOTE: This is a story of fantasy with woven elements of mythology that have been modified for the story. This series is set in fictional worlds, and part on Earth. Some descriptions, geography, and landscapes may have been altered to fit the story

Dustin held in his need to scream and rage at the devastation around him as he struggled to breathe through the putrid smoke that’d settled over the entire pack land like a dense cloud. The ground trembled under his knees until he felt an approaching presence that was too powerful to ignore.

He sat atop a massive stallion that was three times larger than any horse Dustin had ever seen in his world. A regal, emerald-green robe was clasped over his broad shoulders and held together by two leaf-shaped medallions. The heavy cloth trailed the ground behind his horse, which he dismounted with grace while still in mid-gallop before it disappeared into the gray smog.

Dustin blinked up at a man so striking and magnificent that he found it difficult to stare directly into his eyes. A deep, mossy-green gaze that was the perfect blend of jade and peridot. The man looked ten feet tall when he’d been on the back of that stallion, but now, staring up at him, he appeared more around his own height. Dustin inhaled sharply as a rough hand cupped his chin, and fresh air flowed down his lungs. A gust of wind caught beneath his legs and raised him off the ground.

“The pack will starve. How can we live off the land when there is no land?” Dustin had never felt so defeated in all of his life. Raw agony tore into every fiber of his being as failure settled into his bones.

Dustin stood in the middle of disaster and ruin, years of his hard work and dedication wiped out within minutes. The titan was standing far closer to him than he should a stranger, but Dustin didn’t move, and he didn’t dare object. The man flung one side of his robe off his shoulder, and Dustin got a whiff of his scent over the scorched land. He smelled like the woods on a warm autumn afternoon.

He began to repeatedly move his muscular arms around in a circle until the ashes began to rise and spin into a cyclone, gathering until all of the land was clear of the ashes and ruin. The titan opened his arms wide, his eyes closed as if he was waiting for a hug as he whispered words Dustin couldn’t hear. The wind picked up, warm and damp like the start of a fall rain shower.

By the time the warrior was finished, Dustin was left speechless. He didn’t know what to think or feel as raw emotion burned in his center. A confident, calloused palm touched his jaw, thick fingers pressing into the scruff of his beard. Dustin had a sudden urge to clamp both of his hands over the titan’s where it held him so he could keep him from moving, ever. But he remained still, mesmerized.

Dustin gasped at the honey-coated words and chanced a look up, the vision before him almost knocking him on his ass. It’d been years for him, but Dustin had no doubt that he saw desire and appreciation in the man’s green gaze.

“Your fields will blossom again at first light. Plant your new harvest, and you will see bountiful rewards. Your pack will eat and be healthy.”

Neither of them moved, and the titan didn’t speak for a long moment, nor did he step away as his thick eyebrows dipped low like he was confused. Or curious, Dustin couldn’t tell. The man’s large hands cupped his face, then slid behind his head to the nape of his neck. Dustin’s heart beat a bass drum behind his rib cage, his wolf pacing and howling for him to get closer to absorb more of this man, this earth soldier’s potent energy.

The touch was intimate, close, their bodies only inches apart, the hulking man’s glare lingering on his mouth before slowly traveling back to his eyes.

It took Dustin a minute to find his voice. He’d just seen this godlike man come through the clouds on a horse not of this world. He didn’t exactly know who or what he was, but the fact that the beast of a man called him “human” had to mean that this warrior wasn’t. Dustin didn’t even know what direction he’d come from, only that he fell from the sky like an angel. Is that what he was? Dustin had never seen an angel decked out in so much suede and leather with a four-foot sword that shimmered bronze when it was in his hands.

“My name is Dustin Constus Hill,” he finally managed on a husky whisper. I harvest the land for the pack.”

“Noble indeed,” the man rasped, his voice lowering to a puff of air that brushed across Dustin’s forehead. “I too harvest for my lands.”

To Dustin’s absolute dismay, the sexy man oh so slowly dragged his hands down his cheeks until they were gone and back at his sides.

“My brother has found his true love here and has decided to make these pack lands his home instead of in the western realm. I will always come to his aid if he calls. And if you ever need me…” The titan placed his hand in the center of Dustin’s chest and closed his eyes, making his wolf go insane with want. The man spoke to Dustin without opening his mouth, but he still heard the words as clearly as if he’d spoken them aloud as a damp breeze touched his earlobe. “I am Notalus Cavalerie, Lord of Tir an Fhomhair. Do not forget me, handsome mortal. Whisper my name on the south winds, and I will come for you.”

Shifters began to come out of their cabins when the darkness lifted and the moon broke through the clouds, casting a light on the land they’d feared was gone forever. Dustin waved the shifters over to let them know it was okay—they were all going to be okay.

But when he turned back to Notalus to thank him for his help… he was gone.